Vita Blanco is the first in her family of 27 to get a high school diploma and college degree.

Nearly 57% of all men and women in the United States who entered college in 2011 received a college degree by 2017, according to the National Student Clearinghouse Research Center. Completion rates, however, are considerably lower for African American and Latinx students than white and Asian students. Meanwhile, high school completion rates are at an all-time high. Esmeralda “Vita” Blanco is one of those individuals who had neither a diploma nor degree. Her enrollment at Clark College three years ago is a profound reversal for her family.

College graduation rates have steadily increased year after year from 1940 to 2017, according to Statista. However, not all ethnic groups experienced a similar rate of success. Inside Higher Ed reported in 2017 that African American students attained the lowest completion rate, while the Latinx population experienced nearly 10% higher graduation rates than African Americans. The numbers reflect attendance at four-year colleges or universities, as well as two-year community colleges, where graduation rates are considerably lower—39% nationally, according to the National Student Clearinghouse Research Center.

The Washington Post reported in 2016 that high school graduation rates increased by four percentage points since 2011. Like with college degrees, there continues to be a discrepancy in earning a diploma for communities of color as compared to their white classmates, according to the National Center for Education Statistics. Though communities of color students all experienced increases in graduation rates, they lagged behind white students. The Latinx population experienced a 79% graduation rate, while African Americans had 76% and American Indian/Alaska Native groups had a 72% completion success rate.

At 37 years old, Blanco decided to contradict the U.S. statistic and change the trajectory of her future. For two decades, she worked a series of low-paying jobs with little opportunity for advancement. Then, in the fall of 2015, she took what she describes as a “leap of faith,” and found her way to Clark College.

“The deepest desires of my heart were to one day finish my high school education. I started attending Clark’s transitional studies High School 21+ program,” said Blanco. “I [later] had the privilege of crossing the stage after earning my high school diploma.”

In June, the mother of two will finish her associate degree in business administration and transfer to Washington State University Vancouver to study for a bachelor’s in public speaking and communications. Her journey is possible, in part, by scholarships from generous individuals who deeply believe that helping others is at the very foundation of humanity.

Funding that ambition means receiving scholarships from private donors who understand the power of education. In Blanco’s case, she receives several scholarship awards. Meanwhile, a local donor, who used to leave loaves of warm bread on the doorsteps of her neighbors as a young girl, is one particular person with a special story.

Blanco grew up in California among 26 brothers and sisters, none of whom were high school graduates or had college aspirations.

Blanco’s father, an abusive man who suffered from alcoholism, kicked her out of the family’s house when she was 15 years old. After moving from home to home, she relocated to Vancouver, Wash., to stay with her siblings. After attempting to go back to school, she dropped out again in order to support herself. By age 17, she became pregnant with her first daughter. The next 20 years consisted of working to support her family, yet she always had a sense that she could and would do more.

Vita Blanco represented Clark’s high school diploma and GED graduates on stage in 2016 where she shared her story in front of 6,000 people.

“The first time I had to write an essay, it took me 30 hours. But, the day after I handed it in, my daughter needed help with her own middle school essay, and for the first time, I was able to help her with her homework. I knew then that I was on the right path,” she said.

Blanco thrived. When it was time to graduate, she represented Clark’s high school diploma and GED graduates on stage where she shared her story in front of 6,000 people.

“By then, I had decided to continue my education and become the first in my family to go to college,” Blanco said.

Blanco has several aspirations. She’s a Clark student ambassador, a frequent presenter at college events and wants to be a professional public speaker. She encourages others to do their best. In January ­­2019, she earned a top scholarship—the Clark College Transforming Lives award. Recipients are chosen by the Washington State Association of College Trustees (ACT), which comprise 30 two-year community and technical colleges districts in Washington. Each year the group choses five current or former students whose lives were catapulted by higher education. In addition to the $500 award from ACT, Blanco received an additional $500 from Clark College Foundation.

“Beyond the professional side, I want to be an inspiration to my family and give back to my community, especially to other single moms, other Latinas, and anyone who needs encouragement to find and use their voice,” she said.

Blanco is not interested in mediocrity for herself, nor is a Clark College Board of Trustee who is part of a group that provides one of Blanco’s scholarships.

Ever since Jane Jacobsen and her husband Paul moved to Vancouver, Wash., 31 years ago with their two boys, Jacobsen has wanted to “reach high, while giving back to everyone.”

That’s why she volunteered for boards and got involved in Earth Day celebrations. She was also a board member with the Columbia Land Trust, a Washington member of the Columbia River Gorge Commission, a bi-state entity overseeing the Columbia River Gorge, and worked as the founding executive director for the Confluence Project, a public arts organization in Vancouver that installs interpretive art in local parks.

Today, Jacobsen is one of five trustees and a scholarship donor. In fact, she was instrumental in establishing a board of trustees’ scholarship in 2017. Blanco is one of several students who receives this scholarship.

Board of trustees vice chair, Jane Jacobsen, left, always enjoys the time she gets to interact with Clark students. As a donor, Jacobsen is passionate about helping students along their path.

Jacobsen’s education in philanthropy began with her grandmother and loaves of bread. Instead of attending kindergarten, Jacobsen’s parents opted to have their 5-year-old daughter spend weekdays with her grandmother. One of her weekly lessons was to read the newspaper and find people in her neighborhood who were experiencing difficult times, such as sickness or a house fire. On Fridays, her grandmother made fresh bread, wrapping the loaves in brown paper bags and affixing anonymous notes expressing compassion for their neighbor’s unfortunate circumstance.

Board of trustees vice chair, Jane Jacobsen, left, always enjoys the time she gets to interact with Clark students. As a donor, Jacobsen is passionate about helping students along their path.

Driving around the neighborhood, Jacobsen would hop out of the passenger seat, run up to the front door, put the bread by the entryway, ring the bell and run back to the car.

“To be able to give something to people was meaningful. We were just letting them know that people care. They [the neighbors) didn’t need to know who did it,” Jacobsen recalls.

Later in her married life, Jacobsen and her husband experienced being on the receiving end. When Paul was in medical school in Richmond, Va., an anonymous couple gave them checks every six months for living expenses.

Having experienced generosity from others first-hand is a humbling moment. It’s one that Jacobsen takes to heart and carries forward.

The favorite mantra of outgoing Clark President Robert Knight is “it’s all about the student.” Jacobsen, as a trustee, shares that vision and it is why she demonstrates her commitment to students by joining her colleagues in supporting them financially.

“My hope is that students will know that Clark’s Board of Trustees cares about them,” said Jacobsen. “I love to know that this is like dropping a bag of bread and running away.”

“I am currently in the last year of my associate degree in business administration,” said student Vita Blanco. “I am blessed with a part-time job on campus as a student ambassador, which is a joy because Clark College is where my heart is. I love to share my story with others and welcome them to Clark and encourage them that it’s never too late and you’re never too old to come to college.
“The Clark College community has become my backbone in my educational journey. There were many days filled with doubt, fear and too little time to get everything done, but the support and motivation from professors and staff have inspired me and made a huge impact on my success. Every class has offered me an opportunity to grow as a person and as a mother, as well as gain knowledge and skills.

“This journey is not just for me; it is for my daughters and future generations. My hope is to sever my family’s roots of settling for less. I am working hard to accomplish this, to face all the challenges that are in front of me. I realize my story is not completely unique, but it is mine to finish. Clark has given me the confidence to believe that no matter what life throws at me, my education cannot be taken away.” 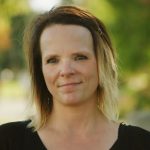 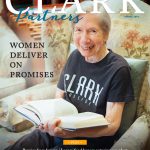