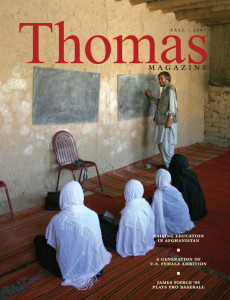 The Islamic Republic of Afghanistan’s health and education deficiencies are like those of the poorest countries of Africa and far worse than in most Asian countries. For decades, while many countries in Asia were rapidly developing, Afghanistan was being physically destroyedâ€”its fields, mountains, orchards, and pastures heavily mined; its trees and forests largely annihilated; its roads and highways made impassable. Its factories and electric power grid came to a grinding halt, and its capital city was severely shelled, with 80 percent of the housing damaged or destroyed. Its political and social life mirrored this physical devastation. The Soviet invasion, years of warlord infighting, and Taliban extremism each subjected Afghanistan’s social and political systems and its people to a distinctive form of psychological, ethical and moral destruction. (Written by Dorothy Knapp, Thomas Magazine Fall 2007)

A Generation of US Female Ambition