The Journey of a Rose

The delicate and creamy petals of roses coupled with the sweet aroma that softens her mood and momentarily transports her to a lovely memory, is Sima Gazm’s lasting memory of her Turkish birthplace and her current home in Vancouver, Wash.

Roses saved her life. The flowers demonstrated beauty, introduced her to God, gave her hope—and welcomed her to America and Clark College. 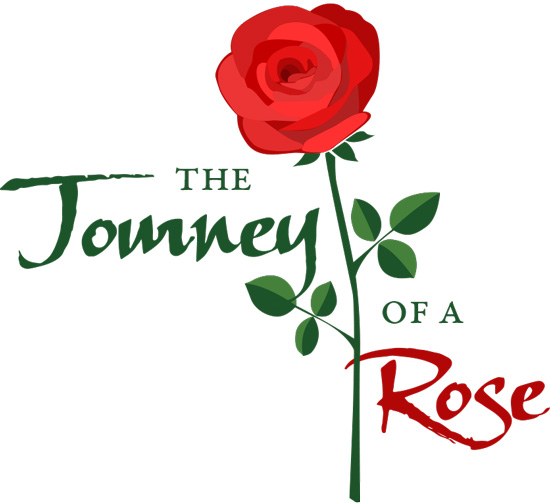 She was orphaned at age 6. Her recollection is that her father was Turkish and died of ill health in 1977. Her mother, of Kurdish decent, died shortly after of a broken heart. Gazm (her name has been changed to protect her identity) was shipped to her 36-year-old stepbrother’s home in Istanbul, Turkey, to live.

It was quickly apparent to Gazm that she didn’t belong in the house. Her stepbrother, an automotive shop owner highly respected in the community, was an alcoholic who routinely abused his wife. He began beating Gazm when she was 9.

During the first years with her stepbrother, Gazm befriended her neighbors, who grew roses. The male neighbor, who regularly washed his black Cadillac, discovered her sitting curbside one day, wishing that her mother would return. Gazm’s child-like hope must have touched the neighbor, because he made her a promise: if she helped him water the flowers and wash the car, he would give her roses to bring home. This act of kindness helped redirect her.

Soon she was visiting him and his wife often. A Christian couple in a predominately Muslim nation, they included her in their prayer sessions. Gazm was captivated by the couple, the kindness and respect they shared was unlike what she was experiencing in her house.

But when her stepbrother discovered Gazm was practicing Christianity, he commanded her to strip off her clothes and then beat her with a water hose. Thereafter, the 12-year-old was banished to a local farm, where she tended sheep with local boys. No more visits to the neighbors; no more attending school.

The violence was incessant. Gazm’s stepbrother eventually killed his 25-year-old wife. He beat her so badly she died of liver failure, according to Gazm. Life was unbearable. But Gazm still thought of the roses and trusted in her faith.

A dream of the ocean was the sign that motivated her to make a move. “Help me, Jesus. Guide me there,” Gazm remembers thinking. She fled one night with a vague idea of heading to Kurdistan where her mother’s family lived and then perhaps to a place where the ocean was.

Carrying few possessions, Gazm just walked and walked. She eventually stumbled upon American soldiers in the war zone in Northern Iraq who fed and clothed her and delivered her to a charity group that assisted Kurds fleeing Iraq. And though Gazm wasn’t trying to escape the civil war that was ravaging Northern Iraq in the 1990s, she was running to save her life and decided to take the help.

The journey took a bloody and dangerous turn. On the trek to a refugee camp, she was thrown to the ground while walking in the desert with a group of refugees. A plane roared overhead and then suddenly the sky started raining bullets.

“The girl in front of me, her head cracked open and her brain fell out…I was already covered in blood from her, so I climbed next to her and covered myself in more of her blood,” Gazm said in her 2013 book I Didn’t Give Up: The True Story of a Woman’s Search for Freedom and Christianity.

That agonizing moment was a harbinger for the next two years of her life. Gazm eventually reached a refugee camp in Saudi Arabia where she lived in squalor with 20,000 others, while being repeatedly raped.

“The smell is like death,” Gazm said of the refugee camp. There are thousands of people crammed into a very small, fenced-in area with no running water, electricity, flush toilets or fresh food. In addition to the stench and filth, the camp is also a place of deep mistrust. 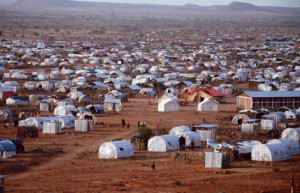 A Saudi Arabian refugee camp, similar to the one Sima Gazm lived in for two years. Photo provided by Sima Gazm.

“In the camp there’s no love. There’s no freedom… strong people take what they want. Everyone is scared of everyone else. You don’t want to appear weak. Everyone lies to everyone,” she said in the book I Didn’t Give Up.

Gazm was forced to cover her hair with a scarf, something she was not used to doing. She couldn’t divulge her Christian faith in the Muslim camp for fear of being ostracized or beaten. She was always on guard, relieved only by her belief that she would get out of the camp and ultimately reach her freedom.

Watching the children gave her hope and the will to persevere. Despite the deplorable conditions, the kids still laughed and played. She observed their carefree way and it reminded her of beauty—like that of the roses.

A chance for freedom was largely random, but families with children had a better shot at getting out of the refugee camp than single individuals, especially men. Gazm was paired with a Muslim man and they married on the conditions that she would cook and clean if he promised not to expect sex. That promise didn’t last. He began raping her soon after they were married and did so every day. Gazm, who was 16 at the time, eventually became pregnant, but when he found out, the husband intentionally punched her stomach in an attempt to harm the fetus. He didn’t want a child; he was in love with someone else, according to Gazm.

However, now that she had a child and husband, Gazm’s opportunity finally came. Though there were thousands of people living in the camp, her name appeared first on a piece of paper tacked to a bulletin board listing individuals bound for the United States.

“I saw that and felt so lucky. I could smell roses,” she said in the book I Didn’t Give Up.

Once she was aboard the plane in 1992 headed for Oregon, she threw off her headscarf. “I don’t need to be covered!” she exclaimed.

Gazm is a happy woman. She greets people with a warm smile and eagerness in her eyes. She expresses her gratitude to Vancouver, Wash., Clark College, President Obama (who signed her citizenry document) and to every facet of American life that she has touched or been touched by. She considers herself a messenger of all that is good about life and teaching others to recognize and appreciate the freedom they have. It’s her life’s mission.

“I remember the past and I think, ‘this is not bad. I’ve had harder.’ Dreams come true. Never give up. You gonna get what you want if you work for it,” she said in the book I Didn’t Give Up. 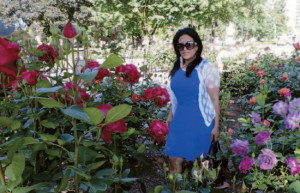 Sima Gazm still loves to visit rose gardens, like this one in Vancouver, Wash. Photo provided by Sima Gazm.

She gained her citizenship in 2008, is studying for a GED at Clark and works as a filing clerk for Clark County. She frequently visits rose gardens in Washington and Oregon. Gazm enjoys sitting amongst the beauty, sipping the delicious fragrance.

Gazm gave birth to a daughter with a man she met and married in the U.S. after divorcing the man from the refugee camp. Though the marriage didn’t last, and she eventually struggled to pay the bills as a single mother, her upbeat spirit remains undaunted.

“I like to help women feel confident. I stress the importance of getting an education so that they can help other people,” said Gazm, who turned 43 in June. Most of all she believes in perseverance. “You must believe in God and your own heart. You should never give up.”

Sima Gazm’s book is written by Andy Bunch: I Didn’t Give Up: The True Story of a Woman’s Search for Freedom and Christianity. 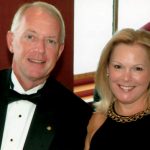 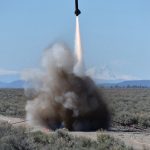