Speaks of the rising hostility toward the U.S., refocus of counter-terrorism policies 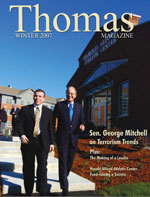 Former United States Senator George Mitchell visited the College during a heated national campaign season last fall and presented a powerful speech about the dangerous trends in terrorism occurring throughout the world and the increasing hostility of other countries toward the U.S. He spoke about the significance of such world problems as the production of weapons of mass destruction, the increase in terrorist groups, the rise of Islamic fundamentalism, the -competition for energy security, and the rising anger toward U.S. policies in the Middle East and other areas of the world. (Written by Amanda Thompson ’07. Thomas Magazine Winter 2007)

Plus:
The Making of a Leader
Harold Alfond Athletic Center Fundraising Success