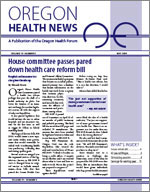 Despite dwindling memberships and revenues in 2009, most of Oregon’s major insurance companies haven’t had to give their employees pink slips – yet. To avoid layoffs, some have reduced their rolls through attrition, while others have adjusted their business models. But questions remain as to whether the state’s big eight will eventually have to trim their forces or cut product costs as employers continue to ax health insurance benefits to stem the erosion of their bottom lines. 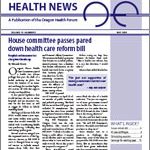