A new advocate for Clark College

For Calen Ouellette, coming back to the Pacific Northwest is a return home to the comforts of nature and family, and a chance to build new partnerships. 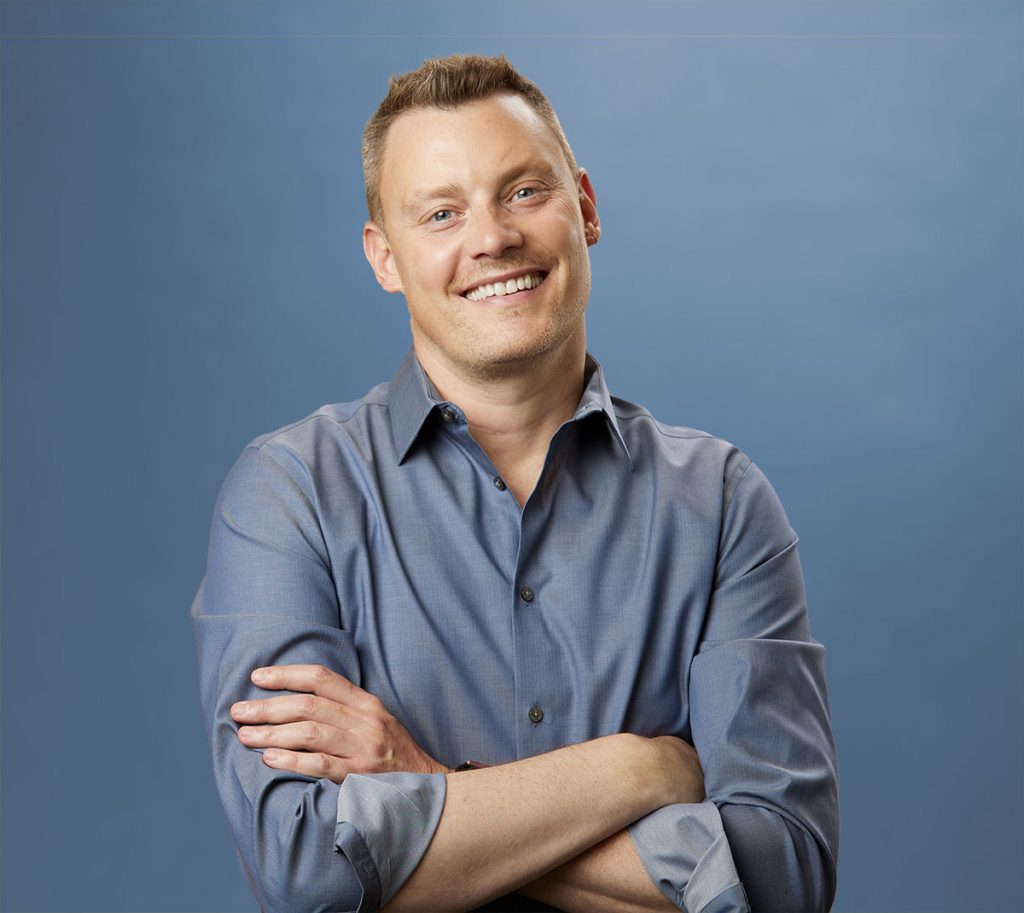 Clark College Foundation’s new CEO wants to diversify support for Clark by connecting with people who haven’t historically been involved in philanthropy. Photo by Craig Mitchelldyer ’00

“One of the things I love about the Northwest is the hiking, kayaking and getting outdoors. That’s where I recharge,” said Ouellette, who began his new job as CEO of Clark College Foundation on May 31, 2022.

Originally from Montana, his formative years were spent in Spokane, Wash., before setting off to college in Pullman at Washington State University, where he earned a degree in public relations and communication from the Edward R. Murrow College of Communication. An MBA came later from the University of Southern California.

The way Ouellette came to understand the world and the beginnings of how to relate to others, came from his early Washington experiences. He got involved in YMCA and the Boys & Girls Club while in high school, and then in student government and as a member of a college fraternity.

“I wanted to get involved. But I didn’t understand how powerful a voice could be or my activation or statements in support of something until this last decade while sitting at tables with dignitaries, corporations and CEOs and was able to lend my perspective and voice.

“I firmly believe that connecting donors and partners with Clark’s programs and projects will encourage them to become advocates and ambassadors of Southwest Washington’s premier community college,” he said.

Fast forward to today, three months after taking the job, Ouellette is finding a community that is eager to help Clark College and its students on their pathways to success.

Some of his objectives are to listen, observe and build partnerships with Clark College Foundation’s staff, donors, volunteers, alumni and other partners, Clark College’s faculty and staff, and the Southwest Washington community.

“President Edwards has a really great vision for where we’re going and she’s building that, taking a good-to-great scenario. The foundation will help her build awareness of what the college is doing and how the foundation is supporting it, and how people in the region can get involved,” he said.

The college is undergoing a comprehensive strategic planning process that will elevate high-level goals for the college over the next five years, providing Ouellette and the foundation’s fundraising and advocacy team with a road map of priorities. One of the top college priorities will be diversity, equity and inclusion for Clark’s students, faculty and staff.

“We have an opportunity, just as Clark is doing, to lend our voices and support to those individuals who don’t generally get a place on the stage or platform to tell their story.

“Whether it be a financial investment or promoting or encouraging advocacy or ambassadorship, fundraising, in general, is white-centric—through its employees and those who give. We have the chance to change that. We may be a regional foundation, but we’re the fourth largest endowment in the country for community college foundations. We have a strong voice,” said Ouellette.

Even before the pandemic, the higher education environment across the country was changing. But following two years of shutdowns, restarts and economic challenges, those adjustments have taken on a renewed urgency.

Ouellette says the nation is headed for a decline in the number of higher education institutions. Yet community colleges have an advantage: they’re already accessible to more people.

“We need more tradespeople. We need to reduce the cost of education. We need to be accessible and equitable to those who are balancing work, family and taking a few courses or pursuing a degree to advance their career,” said Ouellette. “Clark College is providing opportunities for success for our students and the community.”

He sees Clark College Foundation walking in lockstep with the college by providing critical resources for students as they pursue promising futures.

“Community colleges are nimble and have the flexibility to meet student and workforce demand effectively. The foundation has been and will continue to actively promote the steps Clark College is taking to ensure student success and equitable outcomes. This is an exciting time for Clark.”

The foundation recently wrapped up a seven-year fundraising campaign that raised millions of dollars for several Clark programs, like guided pathways and the Veterans Center of Excellence. Over the next several years, Ouellette intends to enhance public relations and marketing to help Clark further promote its excellent programs and services.

“We will adjust our messaging to talk about the newest changes and enhance our engagement to ensure we have ambassadors and advocates. Then, even more people will understand the advances we’re making as a college and foundation,” he said.

His plan also involves an adjustment to the foundation’s fundraising approach.

“Fundraising is not just about fiscal resources; it’s about advocacy as well. It’s engaging people to share a voice and share resources. Yes, we would appreciate a gift to the foundation that supports Clark College. I will never say no to that. However, we recognize some people can’t give financial resources, so what are alternative ways that they can contribute to the mission? Advocacy helps to spotlight the college and its outstanding programs that prepare employees for today’s competitive jobs. Then those conversations may deliver financial support down the road.

“We need to be bold and patient and willing to notice our blind spots and figure out how to navigate around those spots,” Ouellette said. 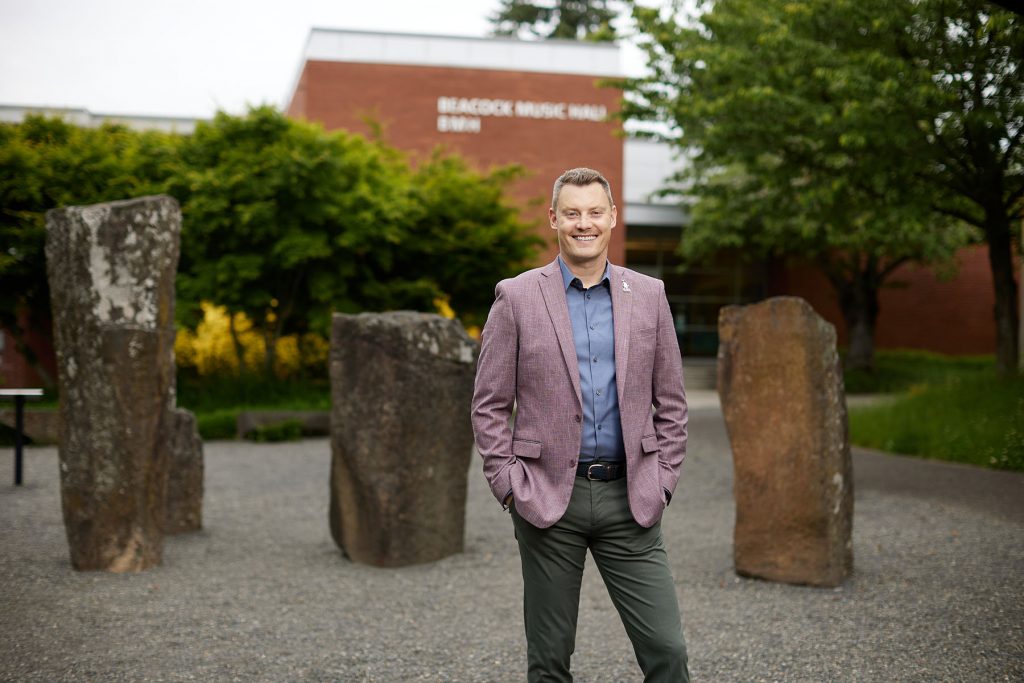 Calen D.B. Ouellette, MBA, began his new role as Clark College Foundation’s CEO in May 2022. He will elevate the stories of individuals who don’t generally get a place on a stage or platform to tell them. Photo by Craig Mitchelldyer ’00

For those who are contributing dollars now, they are increasingly asking to see, hear and read about what their gift does for Clark College—sometimes instantly.

“Many people want to see how their money is being spent. They want to see statistics. They want entities to report what it is that you are doing, whether it’s $5 or $5 million, they expect to learn how their dollars are making a difference. And they are less likely to invest long term; instead, they make short term investments,” he said.

Ouellette anticipates a buildup of additional resources to meet the modern demand for transparency. He and the foundation staff will explore ways to engage potential new donors or higher education advocates who haven’t historically been a part of Clark’s philanthropy.

“This will take resources to build a pipeline into new communities that we haven’t traditionally served or haven’t been given a voice within Clark College Foundation,” he said. Investing in communications and marketing will be a major part of the equation. There will be more social media messages, the use of QR codes, expanded online services and more rapid transactions over personal devices.

“Representing those who have not had a voice in the past, sharing the expansive educational opportunities at Clark, engaging in dialogue,” are all on the table, he added.

Now that he’s in Vancouver following more than 20 years of working in public relations and fundraising in fast-paced American cities like New York and Los Angeles, Ouellette is ready to settle into the cadence of the Pacific Northwest to build partnerships, make friends, advocate for the college and take Clark College Foundation to an even greater level.

Rhonda Morin, APR, is the executive director of communications and marketing at Clark College Foundation. Reprinted with permission. 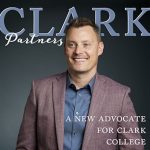