The scene was set with flaky pastries and the author was in the house to answer whodunit questions during a fun book launch of “Till Death Do Us Tart,” held in the Tod & Maxine McClaskey Culinary Institute at Clark College on the warm afternoon of July 17.

Ellie Alexander, a Clark alumna and author of the popular Bakeshop Mystery series and other series, was the main character for the evening. Joining her as co-host were members of Clark College Foundation’s staff. Together they welcomed more than 125 fans and guests who gathered at Clark to sample student-baked treats bursting with summer fruit, take kitchen tours of the new facility and participate in a lively question-and-answer session between Alexander and Alison Dolder ’12, lead chef and head of Clark’s Baking and Professional Pastry Arts program.

During the question-and-answer session, Alexander shared some of her writing tips and tricks, such as setting a creative mood by playing festive Christmas music and decorating her office space with seasonal décor as she writes her next novel, which takes place in December – all in the middle of summer. A no-fail chocolate ganache recipe from Chef Dolder was one baking tip shared. The secret? Use high-quality chocolate and equal parts heavy cream.

Penguin alumni returned to campus to see the new McClaskey Culinary Institute for the first time since it opened on September 25, 2017, following a major remodel. Tucked under their arms were white pastry boxes full of fresh fruit tarts and a variety of other pastries, crafted by Clark baking students.

Clark College Foundation also welcomed Bakeshop Mystery fans who had never been to campus. Expressions of amazement on their faces were a common sight as they chatted with student bakers and learned about the quality of Clark’s learning labs, while also tasting the baked goods. One attendee, who was also an incoming baking student, shared with foundation staff that she was even more excited at the prospect of being a part of the baking team. Another individual was overheard telling Alexander she was switching her family’s education plans in order to attend Clark College.

The Q&A will be available on Penguin Chats, the foundation’s podcast, in late August. 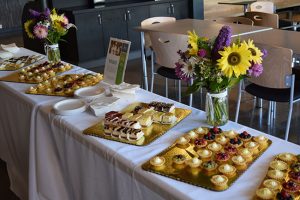 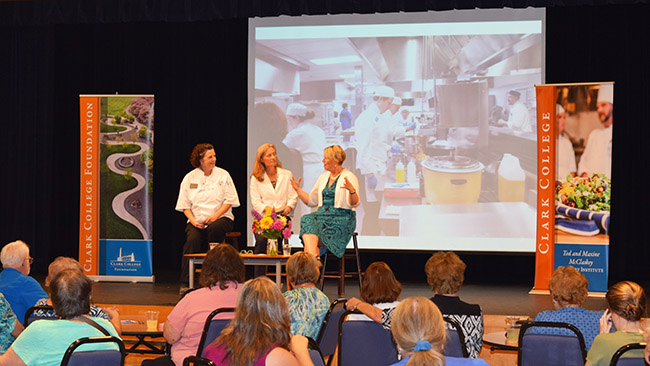 Chef Alison Dolder ’12, Rhonda Morin and Ellie Alexander during a question-and-answer session at the launch party of “‘Til Death Do Us Tart.” 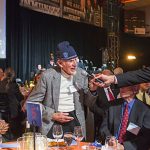 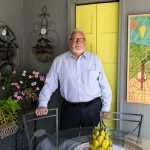