Birds of a feather make great music together podcast

Clark’s music program has a reputation for producing some remarkable musicians. Rich Inouye, head of Clark’s band programs and leader of its revered annual Jazz Festival, helped to create that reputation. He recently put his conductor’s baton down for the last time. Clark College Foundation’s Joel B. Munson talked to Inouye about how he went from soaring with a flock of falcons with the prestigious Air Force Academy Band to shaking things up with a jazzy waddle of Clark Penguins.

Trumpet solo by Cootie Williams, DV Archive.  “Yellow” from the Long Blue Line album by the US. Air Force Academy Band, The Falconaires. 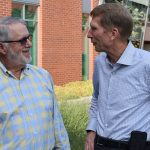 The places we will gopodcastAudio/Video 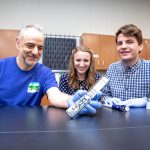