All in the Vegan

If it’s hard enough to get your kids to eat broccoli once a week, imagine feeding them green, red, yellow and other colored vegetables every day. Now throw in quinoa, barley and wheat berries. Is there any hope or would they starve?

He began his foundational training at Clark, where in 1984 he majored in Culinary Arts. But it was a woman, whom he met while attending the college, who helped steer him toward a vegan way of eating.

McCarthy cut his culinary teeth serving traditional American fare at The Kilt while attending David Douglas High School. The school’s eatery was both a culinary program and a full-service restaurant catering to faculty and students.

Clark had a reputation as a leader in culinary education in the 1980s. College representatives came to David Douglas High School in Portland, Ore., and sold McCarthy on the program. He enrolled at age 18. “It was one of the top 10 in the nation at that time,” he recalls.

The soup station at Clark was one of McCarthy’s favorites. “To do a good soup, it has to be flavorful.” He learned about the art of spices; how to combine flavors to enhance the taste and what to avoid. The presentation of the soup is also critical. Garnishes such as minced herbs, cool cucumbers or orange zest can dress up an otherwise bland-looking mixture. 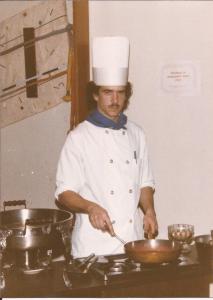 Brian McCarthy prepares a dish at Clark College in 1985.

McCarthy recalls a particular culinary disaster as a student. During a local competition, he concocted a homemade gelatin by boiling beef bones. His plan was to line the platter with a crust, include a pâté in the center, vegetables on the side and gelatin over the top of the entire dish. Gelatin coats and protects fresh food for hours for presentation purposes.

Unfortunately, he added too much water to the gelatin, which melted on the platter, leaving a coagulated mess of sticky gelatin and limp, pale vegetables.

Classmate Karen Davis got first place for her rolled pasta dish at that same student competition. McCarthy was impressed. He had noticed Karen for months and had attempted to approach her several times, but she indicated little interest.

Soon there would be a spark.

McCarthy started life in Boise, Idaho, but by age five, his parents had settled in the suburbs of Southeast Portland, Ore. Karen Davis was a country girl raised in Hillsboro.

For the first part of his collegiate career, McCarthy couldn’t get Karen to go out with him, until one fall evening when she called him out of the blue.

“Rocky Horror Picture Show is playing at the Clinton Street Theater: Want to go?” she asked. The theater is in Portland and the cult film started at midnight. McCarthy couldn’t believe his luck and jumped at the chance.

They dressed up—she in a grey dress with intricate black patterns that outlined her curvy figure, black gloves, pumps and red lipstick; he in a Greek sailor’s cap, vintage brown Army coat with technical sergeant stripes and an earring.

“She looked exceptional that night,” he recalled.

After the date and a dreamy kiss goodnight, McCarthy was walking back to his apartment when he realized that he would marry Karen. They were 19 years old.

Sixteen months later in 1987—a week before Valentine’s Day, they got engaged—five months later, they married. They’ve been together ever since.

Life on the line

Food service is tough on your body and mind; ask any line cook, server or pastry maker. McCarthy’s experience wasn’t any different. After graduating from Clark, he worked at a steakhouse as a cook, deli chef at a grocery store and other similar jobs that demanded long hours, nights and weekends. It wasn’t long before he burned out.

He was getting ready to quit the business when he learned of a weekday job at Intel Corp.—the giant semiconductor chip-maker with offices in Hillsboro. It was a food management job through Bon Appétit Management Company, an on-site restaurant and food-service business for universities and corporations that specializes in enviromental sustainability. He got the job and has worked for Bon Appétit since 2003.

Then three years ago, the McCarthys were ready for a change in location as well as careers, so they moved to Boston, Mass. A coveted job as a chef manager opened up at the Massachusetts Institute of Technology (MIT). 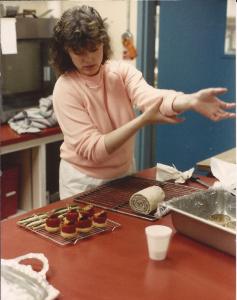 Now at MIT, McCarthy promotes the preparation of healthy foods—something he partakes in personally. Twenty years ago McCarthy and his family switched to a vegan diet.

“The American diet can be fatty and salty,” he said, adding, “We present healthy cooking that is well balanced with vegetables, whole grains and complex carbohydrates.”

Sometimes it’s tricky to get people to try vegetarian or vegan dishes. McCarthy takes pride in finding the right combination of ingredients to make food flavorful and good for you. He recalls a time when he “killed a lot of zucchinis” in an effort to make a good-tasting, vegan zucchini bread. He eventually succeeded.

At work, he also uses cage-free eggs, free-range chicken and pork without added hormones. He regularly partners with local farmers to offer the “Farm to Fork” experience in MIT’s cafeterias and eateries, all hallmarks of Bon Appétit, which is owned by Compass Group, an international food service and support corporation.

But how does a vegan chef get past the obvious dilemma of sampling meals made with meat? McCarthy relies on his kitchen staff to provide feedback.

It requires brutal honesty. “There is no place for getting on my good side here,” he said.

Students are often a hard crowd to please, so cooking for them has prepared McCarthy for a larger challenge: the American diet.

Americans love cookbooks and they seemingly adore making easy meals. The market is flooded with every sort of how-to book. But it’s the restaurant business that McCarthy believes needs help in producing quick, easy and nutritious family foods. 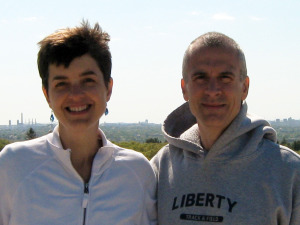 Karen and Brian McCarthy in Boston in 2014.

“This is one of the last stones on the path to kick away,” he said about getting professional eateries to embrace lower fat, grain and vegetable dishes. His latest cookbook—The Professional Vegan Cookbook—highlights food that is as good as, or better than, non-vegan meals. The book is a team effort. He created all of the recipes, while his wife, Karen McCarthy, edited and formatted them for print.

Chefs will find staples such as muffins, quick breads, cakes, dips and sauces, among other recipes. Cooking styles include Italian, Asian, American and more. The book claims 450 recipes for large to small culinary professionals.

Load up on broccoli, but try it with Thai coconut red curry sauce and a bit of  fresh Thai basil to unleash a taste explosion. Then wash it down with vegan coconut Oreo ice cream—even healthy needs to cheat once in a while. 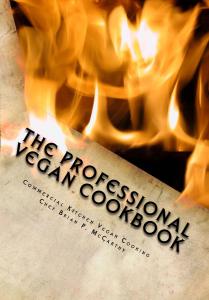 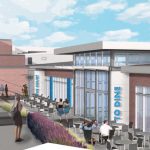