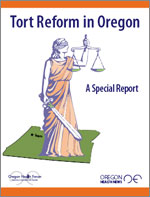 In Oregon and throughout the United States, physicians and the law community have tried to find a balance between what is fair and what is economically sustainable when it comes to medical malpractice claims. This struggle is generally referred to as tort reform.

In 1987, an Oregon law placed a $500,000 cap on pain and suffering; however, it was deemed unconstitutional in 1995. Physicians and the Oregon Medical Association (OMA) argue that because Oregon has no monetary cap on damages for pain and suffering, the cost of physiciansâ€™ insurance is skyrocketing and causing some doctors to move to states where such limits are in place. In 2004, OMA supported Ballot Measure 35, which would have reinstated the cap, but voters defeated it. 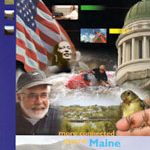